Two great novels will be arriving in time for the Halloween season from Raw Dog Screaming Press. Please support the authors with preorders, or by helping to spread the word to readers who will enjoy their work. On behalf of Lucy and Andy, and everyone at RDSP: thank you!

All the Darkness in the World 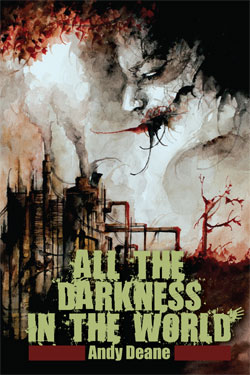 High school is hard for many but Jace has more than his fair share of troubles. It’s bad enough that his parents’ fights have become explosive and he’s the target of a bully at school but all that pales when he happens on the scene of a brutal back alley crime. Though he survives this terrifying encounter he’s left wondering and unsure about exactly what happened.

Years go by and Jace has built a simple life for himself. Finally free of his family he’s beginning to really live when a dark shadow returns to torment him. He didn’t back down from his father or the bully so he’s not going to back down now but it will take every ounce of his irreverent attitude and a healthy dose of luck to survive this time. He’s about to learn that vampires do exist and  there’s nothing romantic about them.

This book will be released Halloween, and can be preordered at http://rawdogscreaming.com/books/all-the-darkness-in-the-world/.

About the author: Andy Deane is a modern renaissance man, having found success as a musician with the band Bella Morte, a horror author, and as a photographer. He has recently given stand-up comedy a shot, and enjoys making people laugh uncomfortably. He was raised on a steady diet of horror films from the time he figured out what a drive-in theater was, and despite his constant ear to ear grin he never lost his love for art that dares to peer in to darker places. Andy was born in Charlottesville, Virginia and figures he’ll be buried there someday.

While the Black Stars Burn 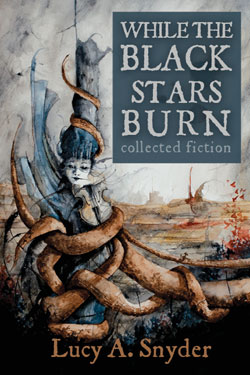 Lucy Snyder’s stories are the sort that carry you away to unusual places, usually dark ones, and this collection is a perfect example. As the follow-up to the Bram Stoker Award winning collection Soft Apocalypses, it contains plenty of darkly imaginative tales. Many of these stories, including the title piece, are heavily influenced by the work of H.P. Lovecraft and The King in Yellow mythos. They whisper madly among each other creating weird echoes. Like the black stars of theoretical astronomy they are dense entities born from polarization so strong that instead of collapsing into nothingness, a black hole, they instead form dark constellations burning dimly with spectral light.

Italian artist Daniele Serra has created a cover that perfectly reflects the breath-taking and layered tales within. He is a winner of the British Fantasy Award and has worked with companies such as DC Comics, Image Comics, Cemetery Dance, Weird Tales Magazine and PS Publishing.

The book will be released in November. Preorder at http://rawdogscreaming.com/books/while-the-black-stars-burn/.

About the author: Lucy A. Snyder is the four-time Bram Stoker Award-winning author of the novels Spellbent, Shotgun Sorceress, Switchblade Goddess, and the collections Soft Apocalypses, Shooting Yourself in the Head For Fun and Profit: A Writer’s Survival Guide, Orchid Carousals, Sparks and Shadows, Chimeric Machines, and Installing Linux on a Dead Badger. Her writing has been translated into French, Russian, and Japanese editions and has appeared in publications such as Apex Magazine, Nightmare Magazine, Pseudopod, Strange Horizons, Weird Tales, Steampunk World, In the Court of the Yellow King, Shadows Over Main Street, Qualia Nous, The Library of the Dead, and Best Horror of the Year, Vol. 5.

Lucy was born in South Carolina but grew up in grew up in the cowboys-and-cactus part of Texas. She currently lives in Worthington, Ohio with her husband and occasional co-author Gary A. Braunbeck.

Lucy has a BS in biology and an MA in journalism and is a graduate of the 1995 Clarion Science Fiction & Fantasy Writers’ Workshop. She has worked as a computer systems specialist, science writer, biology tutor, researcher, software reviewer, radio news editor, and bassoon instructor. She currently mentors students in Seton Hill University’s MFA program in Writing Popular Fiction.

If genres were wall-building nations, Lucy’s stories would be forging passports, jumping fences, swimming rivers and dodging bullets. You can learn more about her at www.lucysnyder.com and you can follow her on Twitter at @LucyASnyder.